Center for the Transformation of Schools > “Nothing About Us Without Us”: LCFF Case Study on East Side Union HSD > Documenting Impact: Refining Existing Work

In addition to supporting the work of the district, students have also helped to refine district efforts by bringing nuance, specificity, and a set of experiences that were absent from a lot of conversations and decisions. Eventually, the culture of relationships began to change and adults began to engage with young people more critically.

“It changed our dialogue. By adding a greater degree of student voice at various levels, students added nuance to where we should direct our efforts to meet certain outcomes.”

Both students and adults in these spaces replaced simplified negative or positive framing of issues with more productive and critical framings. Vander Zee shared how after youth joined these conversations, their [district and adults] approach changed; it not only “changed the questions that were being asked, but made the nature of the conversation more authentic, and richer.”

Currently, there is multi-leveled youth voice representation within the district—from schools to the district board. Beyond that, we can pinpoint how student voice resulted in concrete changes in both policy and practice. Student voice is about more than students sitting on the board or various other committees; this shift in culture has begun to create space for the voices of all students.

“There are students that didn’t participate in this committee, but their data influenced what the student leaders recommended going forward.”

These efforts, coupled with multi-level youth engagement and participation, have radically enriched the quantity and quality of decision-informing “data”.

“It’s a circular culture: students help us design better ways to collect information, they connect the district to the schools, and as we shift to capture meaningful data, we review it together and give recommendations that can be seen in practice.”

As stakeholders reflected on the multiple decisions that are made every day across the district, they were able to share how students had shaped multiple spaces with adults, from committees like the Multi-Tiered Systems of Support (MTSS) Committee, the District Equity Committee, the Student Governing Committee and the LCAP Student Advisory Board, to smaller, sometimes temporarily bound initiatives that students have begun to change although they had been a part of the district for a long time. Examples of these are how students have informed decisions around professional development, urging the district to center unconscious biases, relationship building, and social emotional development, to the work around the Panorama Survey.

A district-wide survey to identify priorities, areas for growth, and other ways to improve the school community.

This student-led initiative was birthed out of LCAP-incentivized participatory structures, along with the student council. Students were key in creating the questions, analyzing the data, and synthesizing recommendations for the ESUHSD’s Local Control and Accountability Plan. Through the survey, a greater understanding of the student body arose; this understanding greatly informed a district-wide push for more democratic schooling.

Due to this student-led action, the Panorama Survey has become more representative of the broad swath of stakeholders in ESUHSD. Superintendent Funk highlighted the change: before students led the Panorama Survey, the district had about 3,500 respondents. The next year, that number increased to 18,000 responses. That ties directly into the way framing has changed following student involvement; Vander Zee clarifies the process with students: “Here’s the survey that your student leaders developed last year; what changes would you want to make to it?”

Students designed, distributed, collected the data, and analyzed the results of the survey.

“The opportunity for the students themselves to create the questions was important. We didn’t just give them a survey and say ‘here, respond’. Students were empowered to make decisions: the student committee decided: ‘this is what you should ask students, this is what’s important to ask students.’”

An example that fully captures the mechanics of this process sprung out of a question, initially crafted by student leaders, and later answered by students across the district during the first time the survey was distributed: “Do you believe expectations of a teacher change based on your race or ethnicity?”.

“The responses of students were startling for many, a clear yes. As a district, coming to terms with students’ experiences, whilst perhaps difficult for some to acknowledge, was important. The question became ‘how do we take that information and use it to inform teachers and say, hey, what do we do with this? What growth do we have to do to do that?’ And I think that was instrumental in our initiative around putting forth the implicit bias training that we did across the district and continue to do until this year.”

With direct access to power and decision-making apparatuses, students worked, unhampered and efficiently:

“Talking directly to the district as opposed to talking to your teachers and then maybe going to the principal and maybe, unlikely, getting through to the district. Here, we created a survey that got sent out that had questions that we had, and we were able to get to many other students’ opinions.”

In this case statistics, often far removed from students’ daily experiences, empowered students with information that they felt was important, relevant, and could inform their work as leaders and also inform the work of The District. Consequently, their inclusion brought an urgent perspective to the table:

“Being able to see the statistics now, we have actual evidence to back up what we [already] believed [to be true]. Now there’s no way of [the district] shutting us down.”

“We saw through actual statistics and facts, for example, that African-American and Latinx suspension rates were extremely high compared to those of Pacific Islanders or Asian-Americans. We knew this stuff, but now that we’re seeing the statistics, it’s like ‘wow, seriously’. I feel like, in a way, it was a wake-up call that there’s a problem at our school, and our voices are speaking up about it.” 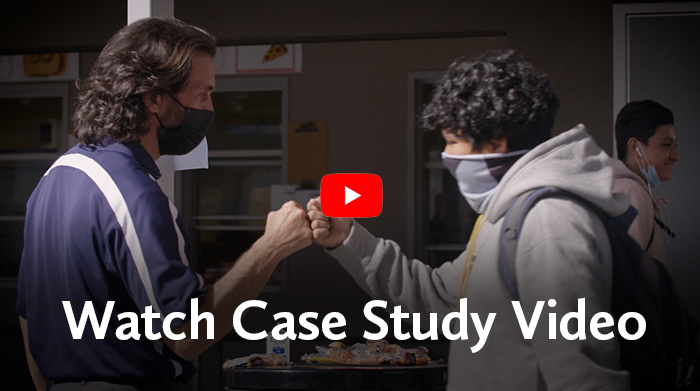